Your DMC on site in Nuremberg

Located in the heart of Franconia, Nuremberg has been a center of trade for over 700 years. As the second largest city in Bavaria, Nuremberg has always been an archetype for internationality. Merchants and traders from all over Europe have sold their goods at different fairs throughout the year ever since the early Middle-Ages. This has not changed at all. Even nowadays Nuremberg hosts over 120 national and international fairs annually with in excess of 30,000 exhibitors. Besides being a bustling trade hub, Nuremberg features many more attractions that make the city a perfect location for incentive events.

Above the rooftops of Nuremberg, the Imperial Castle overlooks the city majestically. Every time the emperor of the Holy Roman Empire came to the castle, the patrician families of Nuremberg were supposed to deliver goods, servants, (and sometimes their daughters) to the royal suite. The most famous incident of one of the diets that were held in Nuremberg is the Golden Bull in 1356. Every noon the Männleinlauf at the Church of Our Lady commemorates the first written-down constituting law in German history. The Männleinlauf was constructed in 1506 by Jörg Heuss. Ever since spectators gather in front of the Church of Our Lady on the Main Marketplace, watching the figurines that represent the seven electors and the emperor Carl IV., and listen to the sound of the bells. Of course, the castle can be booked today, ennobling corporate events and glamorizing every party.
During the Nationalsozialist regime, Nuremberg and its traditions were exploited by Hitler and his party. The Nationalsozialist rallies took place in southern Nuremberg at the Reichsparteitagsgelände. A vast area still featuring monstrous buildings, silent witnesses of the Nazis’ megalomania. The Documentation Center, located at the Nationalsozialist Party Rally grounds, functions as a memorial for visitors today. During World War II, Nuremberg paid its toll: the inner city was vastly destroyed by air strikes and not a brick was left on the other. The Nuremberg Trials of 1945/46 went down in history as one of the first incidents to punish the Nazi war criminals. The historic courtroom can still be visited today. 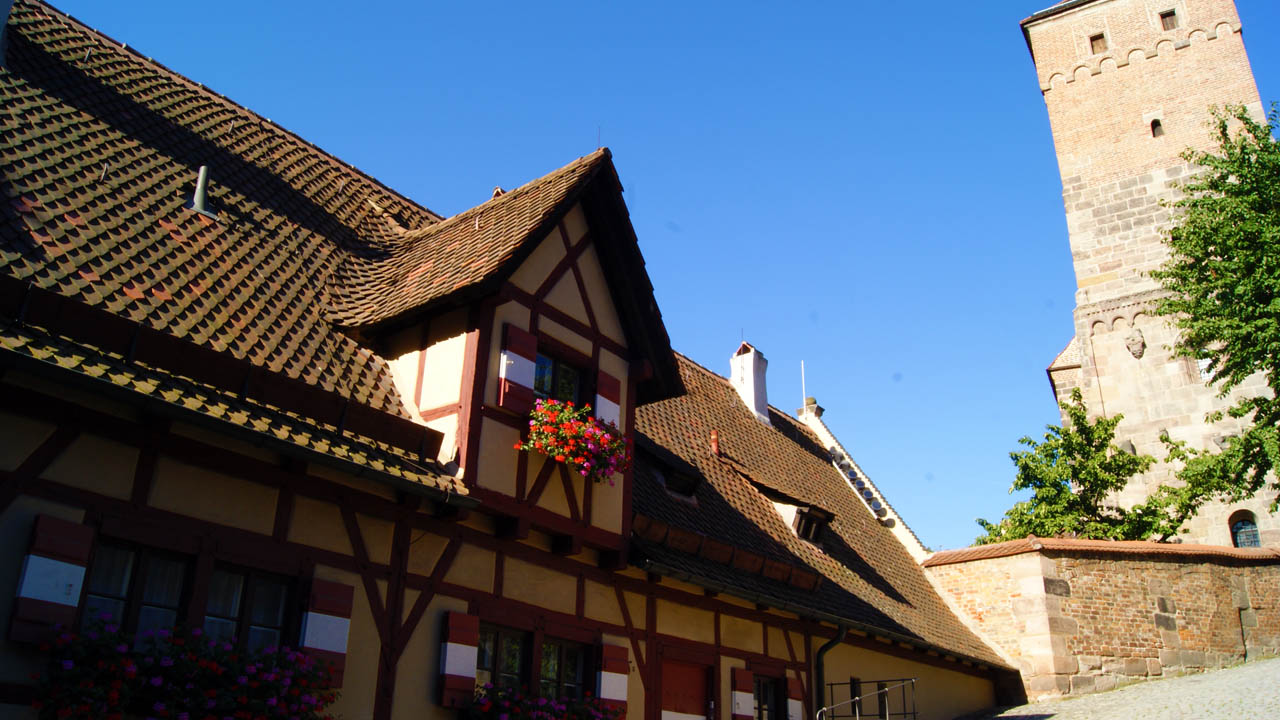 Ever since World War II ended, Nuremberg has tried to overcome its past as a Nazi center. Today, the city has established its reputation as being an active protectionist of human rights; for instance, the Way of Human Rights at the Germanisches Nationalmuseum: 27 columns with abridged quotes of the Universal Declaration of Human Rights. It is no coincidence that the Way of Human Rights is located directly in front of the Germanisches Nationalmuseum. The museum focuses on the respect for all cultures and strives for intercultural awareness. Celebrating a corporate event in the rooms of the Germanisches Nationalmuseum means celebrating in the spirit of modern Nuremberg’s appreciation of tolerance, cosmopolitanism, and humanity. Different halls in the museum can be booked for symposia or any other kind of convention. 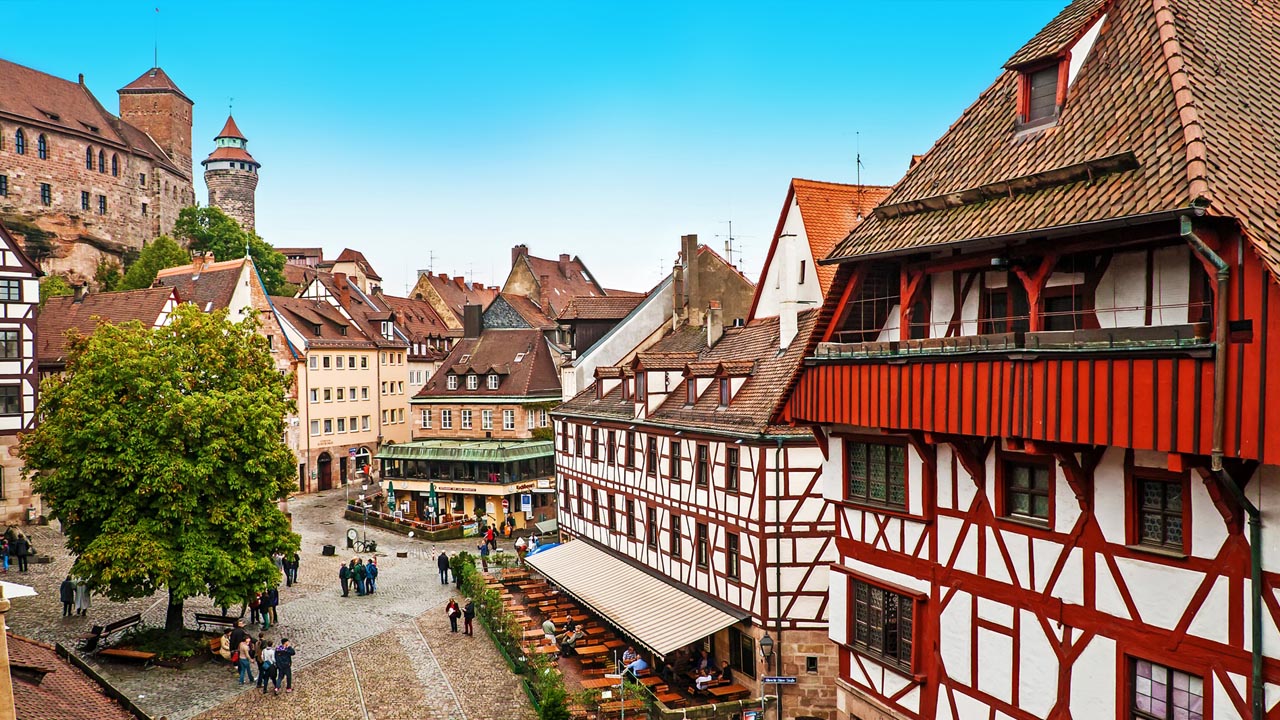 You have an upcoming event, fair or incentive in Nuremberg? 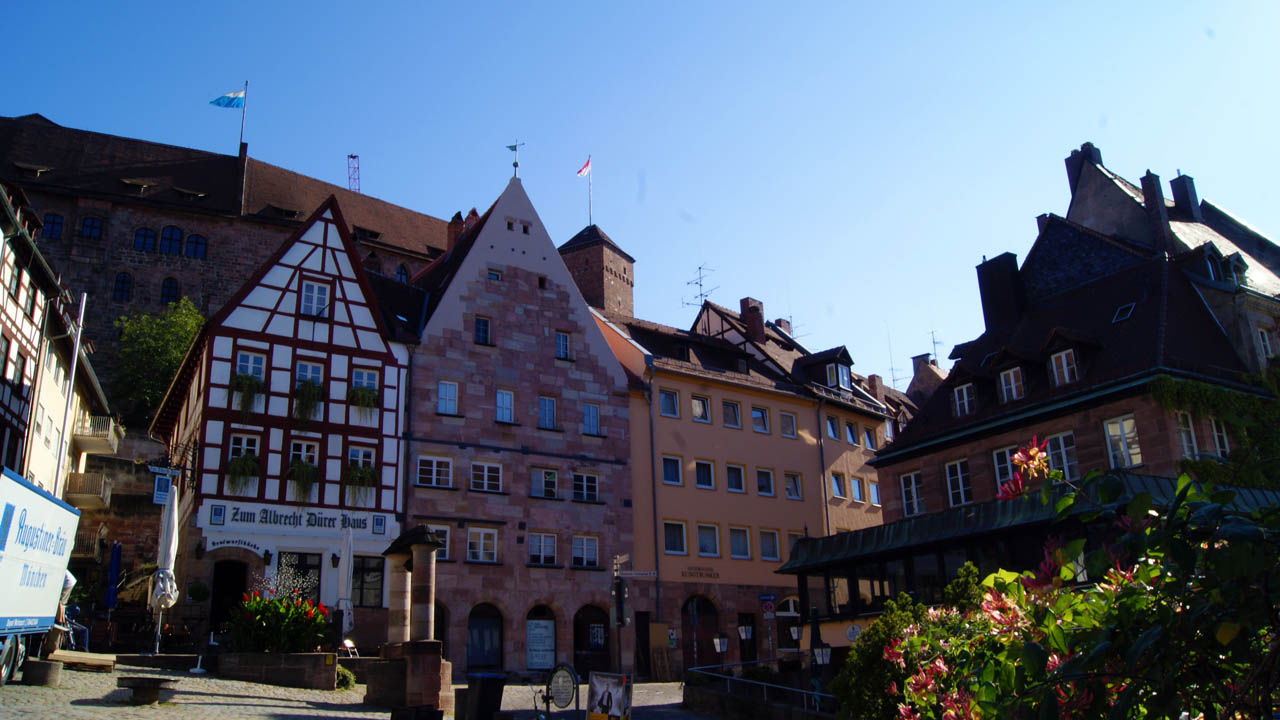 Writing about German’s main cities always involves sausages at some point. Berlin’s Currywurst, Munich’s Weisswurst, and regarding Nuremberg, small marjoram flavored sausages called Nürnberger: welcome to Germany, the land of sausages and beer. Of course, we pride ourselves in referring to the fact that Germany is home to over 80 different sorts of sausages, but Nuremberg is a special culinary case. Throughout the year, the smell of beech charcoal barbecues can be detected by visitors and the small sausages are served in open-sliced hard rolls. “Drei im Weggla” – three in a bun – is an absolute must while visiting Nuremberg. It is quite a mystery as to where and when the sausages were first served, but it is speculated that they were pushed through the keyholes after the pubs were closed in the evening to serve hungry party folks in the old days. Nevertheless, the “Nürnberger Bratwürstl” came to popularity and even the great poet and intellectual Goethe ordered supplies of the little sausages. Jean Paul, a poet of the 19th century, even referred to them as warm forget-me-nots in his stomach. All in all, a satisfyingly hearty dish. 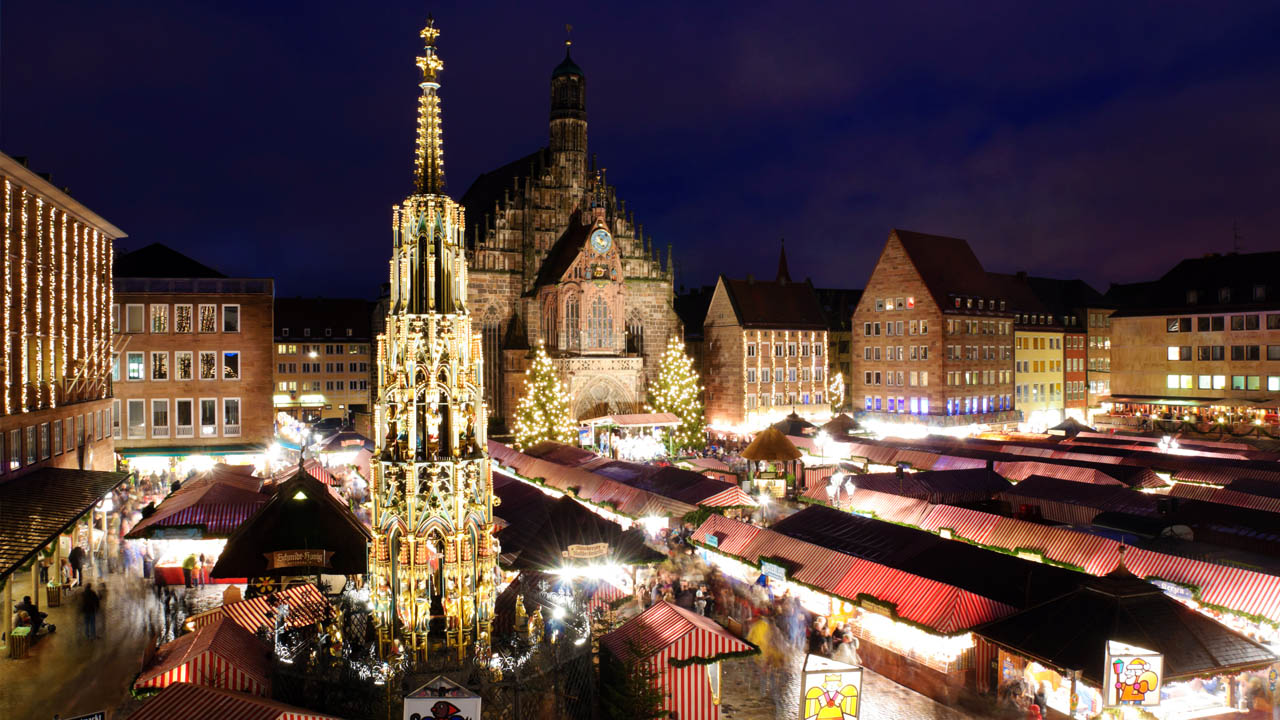 Nuremberg transforms itself into Christmas city in late November and early December. The streets and buildings are richly decorated with Christmas ornaments and on the main market square, small sales booths form a city within the city: the Christkindl Market, whose grand opening is celebrated with the Christkind’s prologue. Thousands travel to Nuremberg to visit the famous Christmas market. Warm flavors of cinnamon, cloves, and anise are in the air and excited anticipation is almost tangible among the visitors of the Christkindl Markt. Everywhere around the Christmas market, small golden angels, so-called Rauschgoldengel, smile down on the spectators. They resemble the Christkind, a figure that was established by Lutheran traditions back in the Reformation. The tradition goes back to Martin Luther who said that the Christkind brought presents to the children. Since 1969, a Christkind is chosen from young amateur actresses who play the Christkind for two years. Usually played by 16-year-olds to 19-year-olds, the Christkind ceremonially opens the market on Friday before the first Sunday in advent. 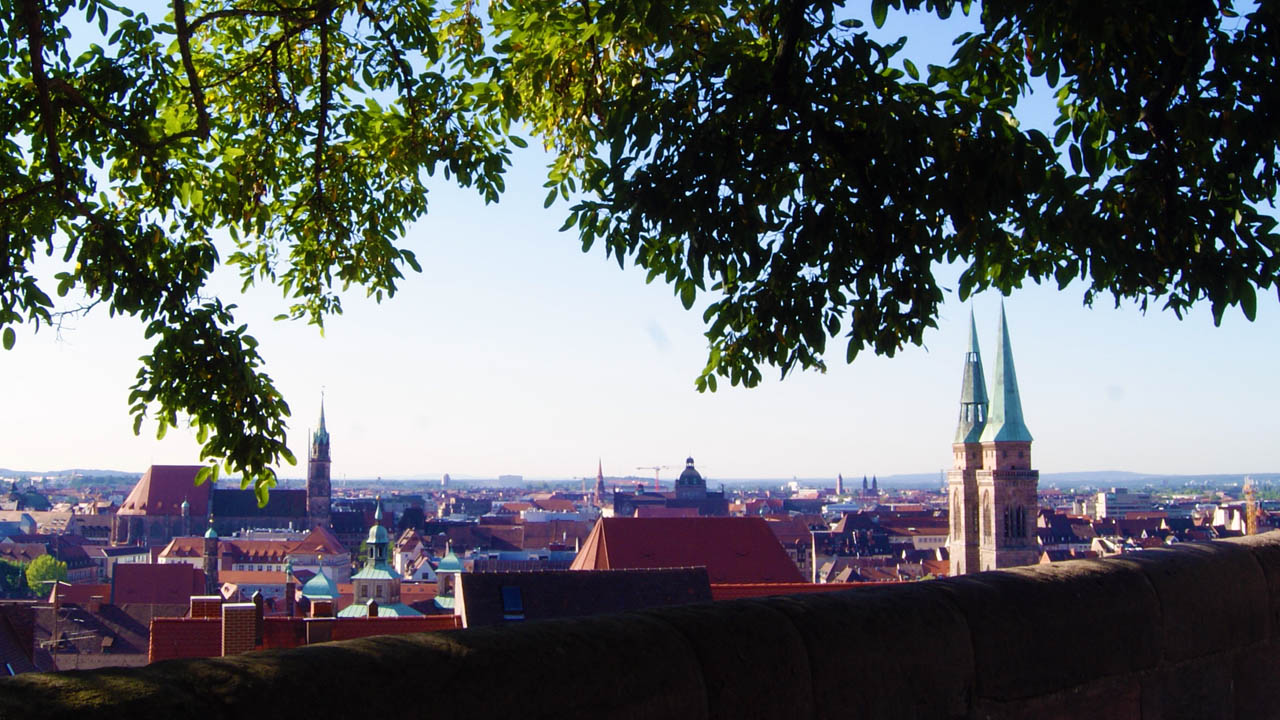 Alongside the sausages, Nuremberg is well-known for its gingerbread. Nürnberger Elisen Lebkuchen are traditionally made without flour, consist largely of almonds and nuts, and are either sugar- or chocolate-coated. Just like the sausages, the gingerbread is a registered trademark that must be produced within the city limits of Nuremberg. Although being a seasonal product Nürnberger Lebkuchen can be purchased all year round in special shops throughout the city center.
Nuremberg has a world-famous reputation as toy city. Beginning in the Middle Ages with dolls, tin figure manufacturers and tin toy producers in the industrial age, stretching to the world’s most important toy trade fair, the International Toy Fair. The International Toy Fair takes place annually and ranks among the largest trade fairs globally. About 2,800 exhibitors from over 60 countries present novelties and the latest trends from the toy industry. An annual highlight is the grand gala dinner “Toynight”. As a gernEvent brand, we are proud that our parent company is a partner of the Nuremberg Spielwarenmesse, being assigned the task of creating these memorable events yearly ever since 2014 (link).

Why choosing Nuremberg for your incentive event is a perfect idea

Nuremberg is a great location: strolling around the narrow streets beneath the Imperial Castle is quite a time-travelling experience. Follow the footsteps of artists like Albrecht Dürer and Hans Sachs and enjoy some hearty Franconian specialties at one of the many small restaurants. Nuremberg is worth every minute you spend there.

Numerous locations are predestined for sales-meetings, company celebrations or even team-building events. Different hotels and an impressive convention center offer a perfect ambiance for any kind of event. As a DMC agency, we know Nuremberg like the back of our hand, and how to create unique memorable moments during your incentive event. We ensure smooth processes, so you can just sit back and relax. Our effective project-management ensures that incentive events deliver the required results on budget and in time. Sustainability is an important issue we keep in mind while executing your events.

As previously mentioned, Nuremberg hosts many different trading fairs over the course of the year. We are happy to provide you with some short facts about the most important trade fairs in Nuremberg.

Biofach is the global leading trade fair for any kind of organic food. Biofach takes place annually in February. With about 2500 traders from over 79 countries, the Biofach is one of the largest trade fairs for consumer goods.

Consumer needs are satisfied at Consumenta: as a large shopping fair, information about newest trends in lifestyle, living and consuming are presented. The market hall, often referred to as temple of food, offers regional specialties.